It's a burning hot July day in Santa Marta de Ribarteme in the province of Galicia, and I am witnessing a spectacle unique to this tiny mountain village. Known as 'green Spain', Galicia is part of that Celtic strip of Europe which shelters in the mountainous nooks and crannies along the length of the Atlantic coast. Like Brittany and Ireland, it has its own language, culture and traditions, and for one day in the year the church here becomes central to the life and death hopes of the devout for miles around. 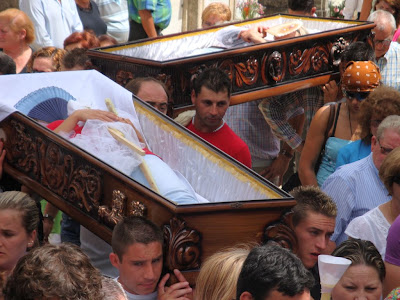 Today is the feast day of Santa Marta, the sister of Mary Magdalene, whose faith prompted Jesus to raise Lazarus from the dead. For those who have had a close brush with death and survived, today is payback time. Some of the pilgrims have made their way up the 6km road to the mountain church on their knees. Some are old, and the journey and the emotion have obviously taken their toll.

A couple of young mothers are helped by their families as they make the final, painful circuit of the church, carrying crying children. At journey's end they light a candle to the Virgin of Santa Marta and make their way into the crowded interior. After mass, the pilgrims emerge from the tiny church holding aloft an effigy of the Virgin, which is then borne around the village to the accompaniment of the wails of the pious and the haunting sound of ritually intoned romerias - traditional chants, the origins of which are long forgotten.

After the religious rites, the people settle down in their thousands to enjoy a vast picnic. Octopus is served from evil-smelling vats, and unlabelled bottles of chilled white wine are imbibed with growing enthusiasm. Soon whole families are dozing under the trees waiting for the heat to subside and the band to strike up, heralding the next wave of festivities.

While the pilgrims and villagers were sleeping off their lunch in Santa Marta, we drove north to Santiago de Compostela - Galicia's major tourist attraction. This magnificent granite town looks like one vast, medieval monument; it is also the third holiest site in the Christian world after Jerusalem and Rome. The church claims that the imposing cathedral around which the old town is built houses the remains of St James the Apostle. It is said that after his execution in Jerusalem, his body was bought to Galicia in a mysteriously unmanned boat, on a voyage that took only seven days. According to legend, his remains were discovered here by a hermit who was guided to the place by a vision in the stars. St James was subsequently adopted as the champion of Christian Spain against the Muslim invaders.